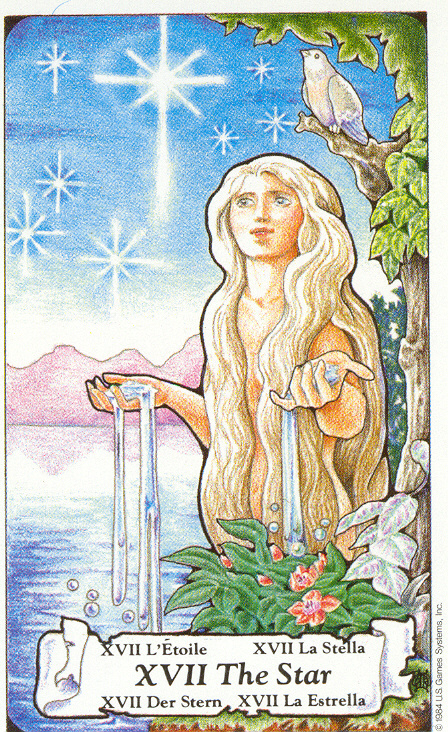 GIFTS OF THE SPIRIT

The two most important functions assigned to Key 17, THE STAR, involve MEDITATION, and therefore, receiving REVELATION.  It is usually during, or shortly after, meditating, or engaging in some type of contemplative practice, that revelations of TRUTH are revealed and received, whether personal or universal in nature.  When we take the time to seriously MEDITATE on a problem, the answer or solution is usually forthcoming, for those who sincerely SEEK are likely to FIND the answer, whether through direct inspiration, the written word or even a casual remark by someone on the radio or something said by a total stranger.  The Lord works in mysterious ways His wonders to perform, so answers may come to us in the most amazing manner.

The AQUARIUS Key happens to be my favorite, even though I’m a Scorpio!  One night long ago when I was first involved with the more serious study of Tarot I had a dream, and in this dream, KEY 17, THE STAR, was suspended in the darkness of space in glorious living detail, the GREAT ISIS UNVEILED.  I shall never forget that dream, for this Key depicts the power and promise of REVELATION that serves to INSPIRE the scientist, inventor, musician, poet, prophet, political leader, or any other evolving soul to bring something meaningful into the world that will uplift the Spirit and make the world a better place.

The stars on this Key are depicted as octagons, symbols of the musical octave, for it is sound that creates Light and brings all forms and patterns into physical manifestation in the Universe, including the Music of the Spheres provided by those such as the Beatles and other equally talented life forms! The seven smaller stars represent the seven sacred chakras or spiritual centers, whirling vortexes of energy in the human body responsible for our apparent physical existence, vortexes of energy that relate to our inner sacred planets, without which we could not exist.

The large Central Star represents the ONE LIGHT responsible for generating all forms, visible and invisible, in this world and all worlds now in existence or yet to be created in the musical scale of the Divine Octave. The human feminine figure represents ISIS UNVEILED, the GODDESS, in her naked pristine glory, bringing the WATERS OF LIFE from the Collective into individual expression.  For, as quantum physics has finally discovered, all forms of life, including human form are made up of vibrating, musical atoms revolving at a specific rate in the World of Name and Form known as the physical Universe.

SERVICE to mankind is the privilege assigned to AQUARIUS, an important part of our evolved AQUARIAN nature, for we all have  AQUARIUS somewhere in our horoscope.  AQUARIUS is the sign of HUMANITY, of being a true FRIEND and universal HELPER, which is why friendship is so important to AQUARIANS.  We are all in this world together, and we all need one another as one grand human family. We all “get by with a little help from our friends!”  This is important to consider during this time of strife. For when wars and rumors of wars are finally put to rest the true humanity of the human family will be glorious and resplendent, and human beings will have ceased to function purely in the lower animal nature.  That is when the ONE LIGHT fully illuminates all the lesser lights in manifestation, and  the Golden Age we all seek in our will finally come into being in the physical Universe, especially on this Earth.

URANUS, Key 0, THE FOOL, and SATURN, Key 21, THE WORLD, are the planetary co-rulers of AQUARIUS.  With URANUS  is the ALPHA and with SATURN the OMEGA, the first and the last, the eternal adventure of the unlimited, universal Spirit into seemingly physical Matter where the individual soul eventually learns how to fully participate and administrate justly and joyously in the Cosmic Dance of Life.  Such is the task of all souls in the eternal cycles of living upon the earth.  And in the process of life on Earth, we must honor and revere our sacred planet, a Divine being, for the future we are creating is not only the future of our children in this life but our own life as well.  We must serve ourselves, our society, and our planet wisely and well, or else, we will be the ones to pay the consequences for our misdeeds and evil actions when we return to inherit what was left behind.

HOPE is another word assigned to Key 17, THE STAR.  The hope of the future and revelation of all good things to come is contained in its symbolism.  It is during the quiet, contemplative moments of MEDITATION that PEACE descends upon the human soul, and the troubles of the world melt away, disappearing from conscious consideration.  During MEDITATION we  bask in the ETERNAL SPLENDOR of the SUPREME SILENCE of the ONE LIGHT OF CREATION, perchance on occasion to hear the MUSIC OF THE SPHERES, the true serenade of LIFE that holds all Creation spinning in place in perfect balance.

It was an exciting time when URANUS transited its own sign of AQUARIUS (April 1995March 2003). There were astounding medical breakthroughs and amazing technological advancements. With URANUS now transiting PISCES, there is an interesting and exciting exchange of energies manifesting in the heavens. The ruler of PISCES, the planet NEPTUNE, is now transiting through AQUARIUS, and one ruler of AQUARIUS, the planet URANUS, is transiting through the constellation of PISCES. It is a time for the GIFTS OF THE SPIRIT to increase in even greater measure, to bring everyday psychic experiences to the masses, which should include contact with the unseen world, possibly even through the use of electronic devices, blessing the many and not just the few. It is a time for spirit and technology to work hand in hand. It is also a time for visitors from other planets and other dimensions to make contact with those here on earth.

MEDITATION techniques are available to all signs of the zodiac, and should be an important part of everyday practice for each individual.  Prayer is humanity talking to God, but MEDITATION is listening for an answer. Then REVELATIONS can be better transmitted, so that you might be lifted up to a better place in order to live in greater peace and serenity. This is my HOPE for you. Besides, Aquarians always ‘get by with a little help from their friends’!