After working many years as an international psychic, tarot reader, astrologer, and metaphysical teacher, I took time out from April of 2004 until September 2007 to devote myself entirely to writing. Three more novels have been completed so far, two screenplays, and my memoir, in addition to the development and outlines on several other books and screenplays. My clients have always come from many different professions and occupations, to include celebrated actors, authors, designers, journalists, politicians, and royalty from various countries, as well as those from all walks of life from all over the world. I’m now giving readings 4 days a week, but I’m still writing, and lately, I’m self-publishing several books and plays. Now that I’m doing readings again I have the opportunity to meet even more interesting people. How lucky can one psychic be?

Early on in my life I was a playwright. I won second place in a play contest with the first play I wrote. My three act comedy Sidney  was later published by Eldridge Publishing. A few years later my romantic comedy Love is Contagious was produced at the Glendale Center Theater in California to enthusiastic reviews that convinced Dramatist Play Service to publish my play. Royalty checks have been received since 1961. My first love is writing: plays, novels, books on the tarot, and screenplays. It’s fun to make people laugh, cry, or think. My primary motive is to entertain or enlighten. That has been true in  giving psychic readings since 1966! I’m now working on my second century of letting people know there are states of awareness and dimensions beyond the three in which most of us dwell on a daily basis. It pleases me that even scientists and physicists are finally waking up to ten, or even twenty-six, dimensions, to the awareness of parallel worlds and universe upon universe into infinity. It’s about time!

I’ve been featured in many articles in various newspapers and magazines in this country and other countries as well, as a psychic-astrologer-tarot reader. Those articles include the New York Times Magazine, Washington Post, Washington Times, Houston Chronicle, Washingtonian magazine, People, Women’s World, McCall’s, The Star, The National Enquirer,Empire Magazine (UK) and You magazine of theLondon Daily Mail to name a few I’m featured in psychic researcher Jess Stearn’s books, The Miracle Workers and Soulmates, in conjunction with my friend actress Susan Strasberg, who also included me in her autobiography, Bittersweet, which was also featured in People Magazinenother friend, Sheila Weidenfeld, included me in her autobiographical account of being Betty Ford’s press secretary, First Lady’s Lady. Our friendship first bloomed during President Ford’s administration. Another friend, astrologer Jeanne Avery, has me featured in The Rising Sign and Astrological Aspects, two of her many enlightening books on astrology and reincarnation. In Time-Life Books‘ Mysteries of the Unknown I’m featured in the volume Psychic Powers as one of the “psychic elite.”

Throughout the years Ive appeared on many different radio and television shows: Mid-Day in New York, People Are Talking in Baltimore (where I was on with Oprah Winfrey several times when she co-hosted); People Are Talking in Boston, Pittsburgh Today, The Panorama Show and Carol Randolph Show in Washington, DC, Sally Jessy Raphael in St. Louis, and many other shows in cities across the nation. In Hong Kong in 1994, I appeared on radio and worked with many diverse and interesting people on that multi-cultural island. I did my own book tour for The Wheel of Destiny: The Tarot Reveals Your Master Plan, Llewellyn Publications, 1991, in US cities, London and Frankfurt. I signed books at the Book Expo in New York City, a first for Llewellyn. That year I was also on BBC Radio in the UK. Then in 1995 I was featured on the Discovery Channel in the Strictly Supernatural series on Tarot, which was also sold as a video and is now on YouTube for FREE: Stictly Supernatural During more recent years I appeared on The Learning Channel, CBS Early Show, Discovery Science Channel, and several other radio shows, including Satellite XM.

It took me a number of years to complete The Wheel of Destiny, but it was a book I felt was owed to my students, as well as those who might follow in my profession. It was important to me to record my interpretation of the Master Spread with the Tarot Major Arcana, which came to me in a state of deep meditation. When I first laid out my own Master Spread I was astonished by what the cards revealed. Soon I was doing Master Spreads for many of my clients with amazing results, and many of their past lives surfaced during those readings. The insights are sometimes remarkable and nearly always enlightening. My current fee for the Master Spread is $1,000 (US), since it takes several hours and considerable preparation. However, if you buy the book, on a day when you have uninterrupted time to spare, you can do your own Master Spread. Simply read the first three chapters, and then look up the various meanings of each placement in your spread. In writing the book I had tremendous help from the Inner Planes and Higher Dimensions, from spirit guides and Masters. Part of the book was actually “channeled,” because later, after reading what I’d written, I was sometimes surprised to learn something new myself! The book ships Priority Mail in the USA for $22, Internationally for $36. Checks, money orders or PayPal is now accepted. You can learn more about the book on this page with a click!

I thought I was starting to write a short story when I began my first novel, The Recycling of Rosalie Up until then I’d only written plays an

d had already started two tarot books. The novel was something of a challenge, but was great fun to write. Writing is sort of like playing God, because the writer is able to create all the characters and all their dilemmas in developing a story. You decide who lives and who dies, or else, your characters may decide after you’ve created them. The novel is a love story about life and love after death, with astral workers, nature spirits, guardian angels, and a sort of Cosmic mother figure in charge at that level on the other side. Since I’d always written comedy, Rosalie Rosenberg is a pretty funny girl in her discovery of different aspects of the mysteries of love and living in many different dimensions. The story has been optioned for film three times with current interest by a major Hollywood actress. The decision to self-publish the novel was made soon after my friend Susan Strasberg died in 1999. She was the one who couldn’t wait to read  every new chapter. She pushed all my confidence buttons that year. Plus, that summer I was dating a handsome Leo publisher who said I’d done an excellent job editing my own material. I wonder where Tim Welch is hanging out these days? Still publishing books maybe? That summer he was making the deal on President Richard Nixon’s memoir for millions! After all, Timothy Welch was a definite charmer and no slouch!

During a telephone conversation with Susan ten days before her transition, she said, “You really do need to do something with your story. People honestly need to read it.” Her untimely “graduation” forced my hand in that regard. I remembered all those days when Susan would drive over to my house in Encino, fix herself a cup of tea, and take the latest rough draft on a new chapter to my room to learn what was happening next in the story. There were times that she laughed out loud, others times when she cried, saying I’d written a highly commercial story. The novel is dedicated to my children and to Susan’s memory. This book ships first class for $16 in the US. Check out the book reviews to learn what others have to say about my first novel that was such a joy to write. 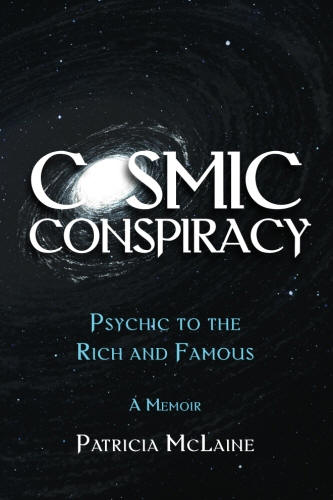 My exposure to metaphysics and astrology began shortly after I was born when my horoscope was drawn in my baby book by a nurse in the hospital. The story of my life’s journey is described more fully and accurately in my memoir:COSMIC CONSPIRACY  Psychic to the Rich & Famous, (6 x 9 Paperback, 418 pages, $17.90 from me (autographed) or on Amazon, $8.99 on Kindle) which includes many amazing anecdotes and stories about those who have strongly  influenced my life, as well as some of the more amazing predictions made to some of my clients that came true with astounding accuracy. As my older grandchildren, my daughter Tomi’s four: Oliver, Jonah, Shaina and Lydia Brassard, started to grow up, I began telling them stories about many of my unusual life experiences, especially those that related to psychic events and dimensions beyond what is considered the norm by the majority of those unconscious to such awareness. During the past several years each of those grandchildren, together and separately, said that I should write a book about my extraordinary life and the many fascinating individuals who have managed to keep me on my unusual yet wondrous and miraculous path. Many of my life experiences seemed truly unique, or even possibly unbelievable, to my elder grandchildren. And, when it comes right down to it, honest and truly, some of my life experiences appeared absolutely miraculous to me during the time that some of them were taking place. Looking back over the many years that have passed me by, it is plain to see that I have been completely and utterly blessed, even during those times when I may have been totally ignorant of that fact. Hindsight is sometimes better than for foresight even for a clairvoyant!

When my work with the paranormal aspects of life and consciousness first started, I had no idea of how far my spiritual journey was going to take me, or of how much I was actually going to learn along the circuitous and wondrous path. In the process I have been fortunate enough to meet many fabulous and incredible people from all walks of life the world over. Some have traveled far to consult with me, while others were met in their distant lands where readings were done at dining room tables or in a hotel room! It seems to me that my journey has been quite long and sometimes challenging, but interesting and informative each and every step of the way. And, in the process, I have been privileged to go to places that I had never expected to go where I met people that I had never ever expected to meet. My journey has provided me with countless interesting and amazing tales to tell, some of them set in the recent or the distant past, with some in other finer dimensions. Soon you too shall be able to read of my many life experiences that involved the rich, the famous, the notorious, the unique and the truly extraordinary in my memoir,COSMIC CONSPIRACYPsychic to the Rich & Famous

Check out astrological reports at Reports

Kindly call 703-373-7353 to set up your appointment or mailto:pattiemclaine@gmail.com

I must say my favorite medium is John Edward. I encourage you to visit John’s website at John Edward – International Psychic Medium – The only official website worldwide. and to watch his show on the  WE Television Network. I’m very disappointed that John is now on in the middle of the night where I live. Perhaps he’s on at a more acceptable time in your zone:

Now make a wish! What do you have to lose?

You deserve it for reading this far!