A passionate story of an Irish American womans survival in the 1800s.

assion and Principle is Patricia McLaines first historical fiction novel and is set in the 1800s, written from an Irish womans perspective.  This is a love story, a history lesson and an example of what strong passion and principles can do for you in life.  The main character, Mary Margaret, is born with a veil (or second sight).  It was fascinating reading Marys perspective of growing up in Ireland and learning about ancient druid lore and rituals that had been passed down for generations while at the same time being brought up as a strict Catholic.  She is forced to grow up quickly, luckily, with wisdom beyond her years.  It was heart wrenching to read about her decision between two men: the first, a passionate smuggler who would stay in Ireland forever, or the other, an intelligent soldier who would live her dream and go with her to America.

Mary Margaret does go to America, but I wont tell you if it was with her soldier!  One of the highlights for me was her intense fight to end slavery and the personal conviction that carried her through so much turmoil.  That was a turbulent time in history and reading about racism and the war from her perspective made it more personal to me.  Maggies character development was strong and the twists and turns in the plot meant that I could hardly wait to pick up the book again to see what would happen next.  As Maggies family grew, Patricia showed what an impact one family could have on history.  I felt connected as a reader to her family both on American and Irish soil.  The Irish ties that were interwoven throughout the novel showed how strong their influence was in American history.

Patricia could easily write ten more novels that tell different stories from various family members perspectives.  This novel was tear-jerking in parts, humorous, realistic, spiritual, and showed how destiny touched Maggies life many times.  The theme lingers… Do we live our lives with the full driving force of our passions and principles? 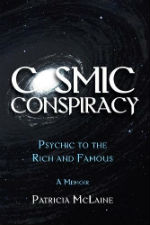 As children we often view the world through rose-colored glasses and know nothing of destiny. Some, Cosmic Conspiracy – Psychic to the Rich and Famous reveals, are destined for an entirely different path. Renowned psychic to the elite and author Patricia McLaine never intended to be a psychic consultant, much less a really popular one. More recently, her future-predicting skills have translated into a Blog Talk Radio show called “Exploring the Paranormal with Pattie.”

It is important to note the reason behind the title Cosmic Conspiracy, since Patricia McLaine never consciously chose to pursue the field of the paranormal. Nonetheless, there was a conspiracy of cosmic proportions brewing that pushed her into becoming an international tarot reader, psychic, and astrologer. She has made thousands and thousands of predictions on love, marriage, children, divorce, home, health, wealth, career, family and friends, success and failure for myriad individuals.

In the course of reading for over 40,000 people, McLaine has traveled from one exotic locale to another. They include London, Madrid, Florence, Rome, Geneva, Ibiza, Bombay, Kathmandu, Singapore, and Hong Kong. Her list of famous clientele features prominent entertainers and authors such as Susan Strasberg, Goldie Hawn, Shirley MacLaine, Peter Sellers, and Michael Crichton, as well as notable journalists and a few politicians who ended up in the White House.

As with Patricia McLaine, destiny often does the picking. The ‘cosmic conspiracy’ began one Sunday when Patricia playfully ‘pretended’ to read a friend’s cards. Using her own words, Pattie states, “Apparently, on that particular Sunday afternoon I was being cleverly set up, by my mischievous though astute spirit guides, for one of the biggest surprises and the very beginning of the most magical and mysterious adventure of my life! In my opinion, it was a clever, capricious and cunning scheme–if not an Absolute Cosmic Conspiracy!”

In a unique and indirect way, this book opens the reader’s consciousness. Even those who don’t believe in psychic abilities will find this book entertaining and enjoyable. Visit Patricia’s official website ([…]) to discover her extensive list of credentials, as well as her predictions for 2011 and previous years. You will be amazed and impressed.

Overall, Cosmic Conspiracy is a page-turner that will appeal to audiences from all walks of life. This book is a highly-recommended must read!

Cosmic Conspiracy – Psychic to the Rich and Famous is Patricia McLaine’s journey through life and how she gained famous clients and helped to shape their careers for the better. Thoughtful and intriguing on the insight on the many types of life, Cosmic Conspiracy is a metaphysical memoir that will intrigue those who wish to know the life and ways of the psychic.”

Back in the 1960s, Patricia McLaine was a young woman living near Hollywood who had just given up her dream of being a famous actor. But then she latched onto the notion that she could become a great screenwriter. She went to George Darius, a famous psychic in Venice Beach, to ask for a reading, fully expecting a Tony or Oscar for her script. His conclusion startled her: Youre going to be a famous psychic and travel the world to read for the rich and famous. As much as she imagined herself as an actress or screenwriter, fate seemed to be pushing her toward being a psychic. It was a cosmic conspiracy. When she began doing readings at age 30, she realized she had some talent for this and has been doing it ever since.

In McLaines memoir, Cosmic Conspiracy, she estimates that she has done some thirty to forty thousand readings, and, yes, many of these have been for the rich and famous. Her book is filled with anecdotes about her encounters with Hollywood stars, Washington politicians, and Texas billionaires. In the late 1970s and early 1980s, her predictions about world events appeared in the tabloid, The Starshe learned that when she focused her intention and attention, she could see disasters coming and some of the spectacular events that happen to celebrities in the news.

Generously sprinkled through her storytelling are the unique perspectives of what being a psychic is all about. Her studies of various paranormal subjects helped her overcome the nay-saying bias of her Mormon background so that she could fine tune her psychic impressions using tarot cards, astrology, numerology, graphology and psychometry. Shes also studied under various spiritual masters to get deeper insights into the Akashic Record, karma, and spirit guides.

Several of her chapters are so densely filled with the names of famous actors, and her brief predictions for them that the reader feels incredulous. This psychic is either very imaginative or very famous in her own right. But her book is also filled with signed photographs of some of the actors she befriended, many of whom she met through her network of friends and famous clients who reported to their famous friends. Perhaps the more interesting chapters are those where she develops the storyline with her closest friends, which include actress Susan Strasberg, Shirley MacLaine and Goldie Hawn.

The author is a Scorpio, and so is Goldie Hawn. One day, Goldie phoned for a reading to ask about her love affair with Bill Hudson. Goldie was pretty sure that this is it, but thats not what she got. As Patricia explains, her job is to tell the truth. When she said that the two would have children together, but they wouldnt grow old together, Goldie was disappointed and refused to talk to Patricia for years afterwards. How these Scorpios reconciled their friendship is one of the best stories in the booka tale of amazing synchronicity and truly impressive psychic ability.

Overall, Cosmic Conspiracy is a page-turner that will appeal to audiences from all walks of life. This book is a highly-recommended must read!”

This is a memoir of the author’s life as a psychic in the world of the paranormal where she helped thousands of people, including various celebrities.

“A smoking hot romance novel! The innocence of bittersweet love in the summer of 1967.”

The author, Patricia McLaine, sets the scene on fire right from the beginning in Bittersweet Summer-Paula’s Story.  It is the summer of 1967, the ultimate summer of free love.  Paula is a single mother and up-and-coming artist living in a beach house in California with her two children.  The book starts out with a bang when sparks fly between Paula and her ex-husbands young hot nephew.

This isnt a woman who sleeps around though.  Her first love interest is scandalous and Patricia takes the reader through all of the questions that a confused woman faces in a tough situation dealing with self-doubt, responsibility and morality.  Love is not logical but we see Paula trying to decide what is lust and what is love, never an easy choice where passion is involved.  Patricia writes some heavy-duty love scenes making this a solid romance novel. You will never think of the beach at night the same way!

Paulas friend Dana is her best friend and an intriguing character who knows everything about Paula.  They have an intense connection that some would say is psychic.  The author has also written a novel set in the same summer called Summer of Love-Danas Story where readers get a chance to know Dana that summer as well.  Dana happens to introduce Paula to a sexy Texas rancher, sparks fly and the drama continues! Will Paula choose the young hot lover or the driven Texan who knows what he wants?

I wont give away the ending but the book was a fun read from start to finish.  Paulas turmoil continues throughout the summer and I eagerly await the next chapter in her life to find out her ultimate choice and if the next summer is bittersweet as well. This is an author to pay attention to.  She is definitely heating up the romance world.

The 1967 Summer of Love brings more than its share for artist Paula, as she reignites the flame with Jamie and meets Beau, a handsome, wealthy Texas rancher.

“Danas story of steamy loving and sexual independence in the Summer of Love.”

This is one of those books that you want to read from start to finish – Summer of Love:  Danas Story.  It is a light read that leads to some interesting moral questions.  Patricia McLaine, the author, does a fabulous job of snatching the reader and immersing them into the world of Dana.  It is easy to get caught up in the plot and characters.

The story is set in 1967, the summer of love.  Dana Scofield is a film actress whose career is taking off and so is her love life.  Her life is full with developing her acting career, juggling her dating world, to setting up her best friend Paula-an artist.  Danas love life gets into full swing quickly and we see her dating a number of men at the same time reinforcing the free love of the 60s.  The author gives us a glimmer of insight to what women experienced in order to gain sexual independence during that time.

We see Dana develop throughout the summer as she learns more about herself with each man she dates and has fun at the same time!  An old flame emerges and causes confusion about what she wants in a relationship and what she wants for her future.  Does she want to marry any of these men or none?

The conclusion was satisfying and left it open to a sequel that I look forward to.  This novel is in the romance genre and the love scenes are steamy, but not cheesy, and had me heating up, winking at my guy saying, Well try that later.  There is also a current novel that goes hand-in-hand with this one.  Patricia has written more about Paula, the artist, set in the same summer called Bittersweet Summer: Paulas Story, also worthy of a read.